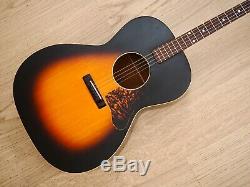 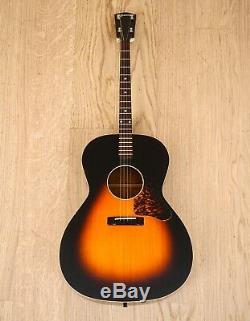 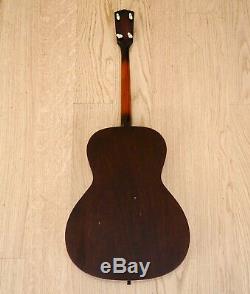 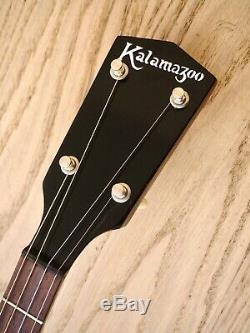 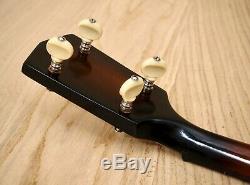 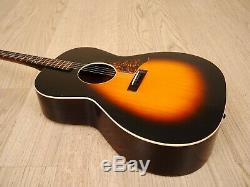 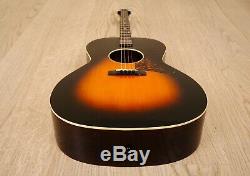 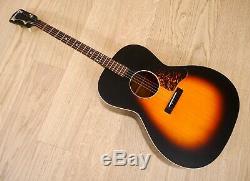 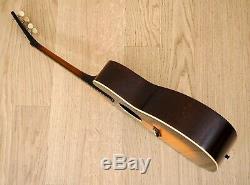 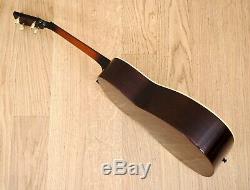 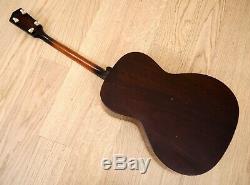 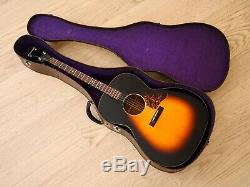 Up for sale, a 1930's Kalamazoo KTG-14 in near mint, collector-grade condition and in perfect working order. Manufactured by Gibson under the Depression-era "Kalamazoo" banner, this KTG-14 is an impressive Pre-War instrument with ladder bracing, solid Honduran mahogany back and sides, and a solid Adirondack spruce top.

As Gibson's most popular sub-brand produced in the 1930s, Kalamazoo was one of numerous names affixed to Gibson flattop instruments to keep the company afloat during the lean years of the Great Depression. This KTG-14 has a feel and tone consistent with Gibson's Pre-War output and is a tenor version of the popular KG-14, which was in itself a ladder braced iteration of the Gibson L-00. The spruce and mahogany tone wood combination yields a sound which is incredibly big, nuanced, and thick. The top end cuts, and the projection is simply astounding. This little ladder braced machine simply wants to be played and played hard, delivering top end that shimmers and. Just a touch of the boxy bark that defines many later ladder braced Gibson acoustics. Strung with fresh string and lightly braced, this Kalamazoo weighs a mere 2lbs 15oz and really sings with low, comfortable action all the way up the fretboard. The mahogany neck has a deep V profile with ample heft and a consistent, prominent V carve in every register. The unbound Brazilian rosewood fretboard retains the original slender frets which show. Just a touch of wear on the crowns on the top two strings on frets 1-4. The guitar features 14 frets clear of the body and has a scale length just shy of 23. The original carved ebony nut measures 1 1/8 wide, and the headstock retains the original "banjo" tuners which still function as intended. The headstock has a flawless Kalamazoo silkscreen on the face. The body features original cream celluloid binding on the top and soundhole, framing the dark Tobacco Sunburst lacquer finish on the top. The original Brazilian rosewood bridge is intact, and a new bone saddle has been carved with ample height, allowing for comfy action in all registers of the fretboard. The neck set is original, and the neck meets the body at an angle that has been viable for the past roughly 90 years and will be ideal for decades to come. Cosmetically, the guitar is quite fetching with its warm nitro lacquer sunburst top and tiger stripe celluloid pickguard. This is a crack-free instrument, and the lacquer finish is 100% original with no touchup or overspray, with the bridge finished over as was the fashion with many Gibsons in this era.

There are only a couple shallow dings on the back and light scuffs on the treble side of the body. The body measures 14 1/2" wide at the lower bout, and boasts a body depth of 4 1/4". Emphasize enough how loud this little guitar is, and single notes are particularly round and complex.

It's as fine an example as we've ever seen of a Pre-War Gibson tenor, exceedingly well cared for and sparingly played, yet with a sound that's incredibly big and open. The original purple-lined chipboard case is included and also remarkably clean.

The leather handle has come loose from its metal loop on one end, yet is still intact, and all of the original latches are present too. Check out our shop "Mike & Mike's Guitar Bar, " and please let us know if we can answer any questions! International orders will be declared as merchandise, and the value of merchandise will be declared as the amount paid. We cannot declare anything as a gift or for a lesser value.

The item "1930s Kalamazoo KTG-14 Vintage Pre-War Tenor Acoustic Guitar, Gibson-Made withohc" is in sale since Monday, July 1, 2019. This item is in the category "Musical Instruments & Gear\Guitars & Basses\Acoustic Guitars". The seller is "mmguitarbar" and is located in Seattle, Washington. This item can be shipped worldwide.