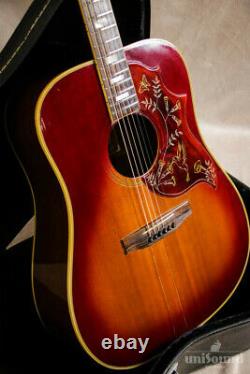 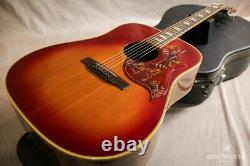 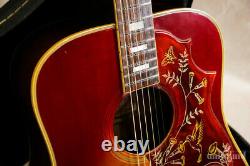 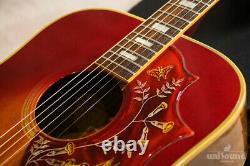 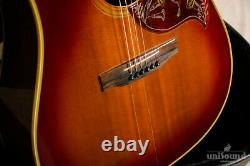 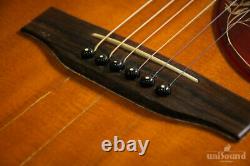 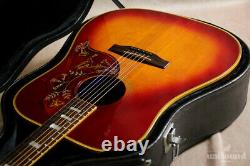 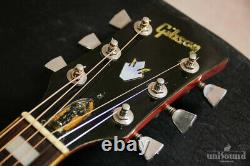 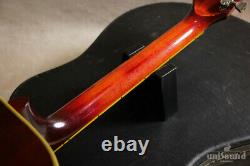 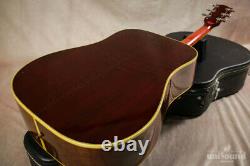 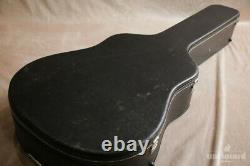 Gibson Hummingbird Custom 19741975 / Acoustic Guitar w/ Hardcase made in 2005. Gibson "Hummingbird Custom" vintages are available. A classic acoustic guitar along with the J-45, which appeared as Gibson's first square shoulder type acoustic guitar. The model that arrived this time is a hummingbird custom from 1974 to 1975 from serial. It's from the Kalamazoo factory era. The original specifications are spruce top, mahogany back & side, and mahogany neck, but in the 70's, like Les Paul, the neck is a 3-piece maple. Even in this era, there is a large pickguard with an illustration of a bird engraved, which can be said to be synonymous with this guitar.

The sound has an impression of a quick rise peculiar to this era. The reason why many folk musicians and singer-songwriters of songs are loyal is probably because the chord stroke sound and the song go well together. Since its appearance in 1960, the only difference from the current model is the bridge and pegs, and the neck of this 70's model is about 3 pieces, so there is almost no difference between the reissue model and the current model, so it is almost from the time of appearance You can see that it is a completed acoustic guitar. Many rock musicians such as Keith Richards of the Rolling Stones also use it, and the gutsy sound is recommended for those who make heavy use of chord strokes.

It is a product that has undergone basic maintenance and cleaning, so it is in a condition that you can play it immediately! [Appearance] There are repair marks on the top and paint cracks on the back. There are traces of re-pasting the bridge. [String height on 12F] Currently, 1st string side: about 1.8mm, 6th string side: about 2.8mm. [Truss rod] There is room.

[Fret condition] Approximately 60% remaining Good condition with no chattering or clogging! Tuners: PRS Low Mass Locking. Both the electrical system and neck condition are in good condition! I think this Mira is a simple guitar that has an amazing lightness of 2.64kg and has a good sound.

Since the bridge is a stop bar type, it has a simpler and more crisp feel. The semi-hollow specification has a unique air feeling, and the clean and crisp crunch sound is all comfortable. While the PRS's honor student impression of glittering treble and uncrushable bass remains, the high component is insisted, so it feels good to squeeze the tone or distort it. Recently, there are many guitarists who drive semi-hollow guitars insanely, and in heavy rock, this guitar sounded outstandingly good.

It's great that you don't get tired at all after a long rehearsal or traveling. Isn't it suitable for women? A great model that tells you that just because it's heavy doesn't make a good sound. Our staff also recommends Mira.

[Appearance] There are small scratches, dull parts, and a dent on the edge of the body back, but the overall appearance is beautiful. [Fret condition] Approximately 80% remaining Good condition with no chattering or clogging! Year of manufacture: 1970sTop board Material: SpruceSide board Material: MahoganyBack board Material: MahoganySerial number: B301409Accessories: Hard case. The item "Gibson Hummingbird Custom 19741975 / Acoustic Guitar with Hardcase made in 2005" is in sale since Friday, March 19, 2021.

This item is in the category "Musical Instruments & Gear\Guitars & Basses\Acoustic Guitars". The seller is "tresurejapan" and is located in Japan. This item can be shipped worldwide.