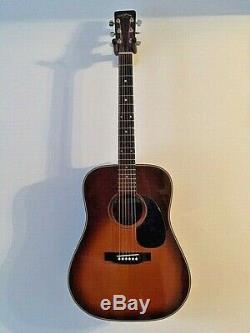 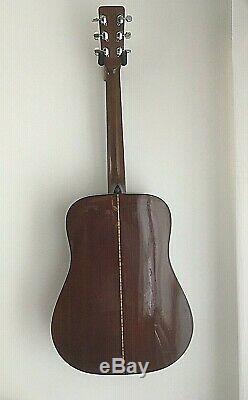 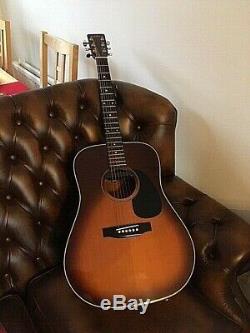 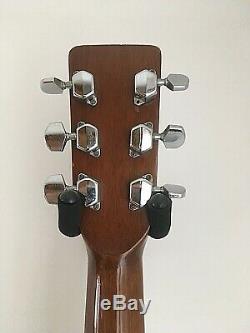 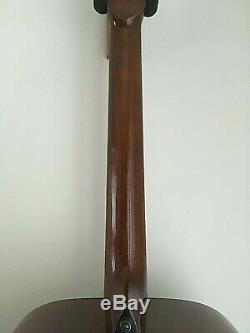 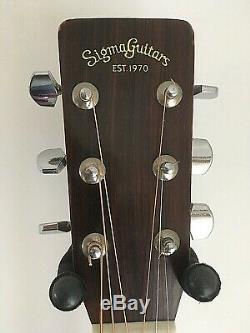 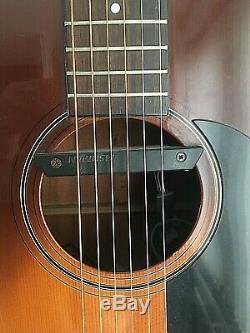 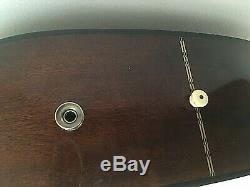 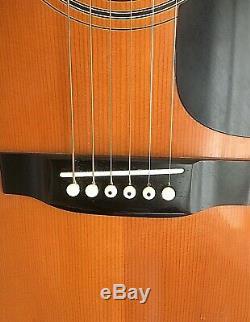 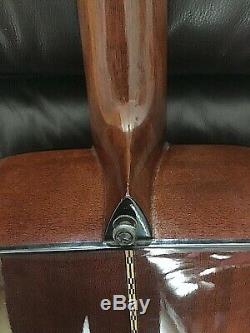 SIGMA DM-5 Acoustic Guitar (Made by Martin). Also comes with Fishman's Sound-Hole Pick-up. Which can be removed if required.

Also 3 of original pins still there. It comes with a few dings/scratches as you would expect but they are very few and it is in great condition from a guitar this age as you can probably see from the photos. There is a slight buzz from the low E string but only when it is open and can be easily adjusted. Enlarge the photos to have a closer look.

The sound is incredible from this guitar. I have 2 DM-5's. User reviews for the Sigma DM-5.

5/5 based on 3 reviews. I have been playing guitars on and off for about 45 years starting with folk, rock and roll, and bluegrass. I wish I had all the guitars I've ever owned. I'm not as good as I should be, but I so enjoy it. I bought 2 Sigma DM-5's on E-bay and it was the older Japanese model with the'Sigma' on it and the other one was slightly newer Japanese model with the'Sigma Guitars Est.

The guitars sounded EXACTLY alike not only to me but to experienced guitar people, one a used guitar store owner and the other a 75 yr old master luthier. There were differences in the weight of the guitars, the older one was noticeably lighter and slightly thinner sides.

Don't get me wrong, the Gibson had a nice smooth lower end on it, but recently I've been playing bluegrass and the Sigma has more punch in it which I like. Two changes that I made to the Sigma are bone bridge pins and a bell brass saddle.

This really jacked up the sustain and volume of this guitar and got some double takes from the boys playing the Martins at bluegrass night. I read somewhere on the internet that acoustic Sigma guitars won't or may not stand up to medium or heavier strings. I only saw it one place (I can't remember where).

The overall construction of these guitars is excellent, very, very little belling of the top of the guitars, not enough to warrant any luthier remedy. The action can be set as low as you want to go. Natowood neck (joined at the 14th fret). Adjustable truss rod through peghead from 1970 through 1979. This is part of Martin's Japanese import line of the 70s - Sigma.

The DM5 is basically a Martin-designed dreadnaught guitar, with the same bracing as a USA model, but different woods. It has a "natowood" neck - I'm honestly unfamiliar with this type of wood, but I can say that the neck of the guitar I'm playing on plays well, is still in good shape after at least 30 something years, and the guitar's sound overall is very bold and bright, so the wood can't be that bad! This is a shocker of a guitar. Breaking this guitar out of the case at a gig, most anyone assumes it's a USA Martin until they get really close. It looks just like one with the exception of the logo, and it sounds just as good.

The tone has a warm yet thick fundamental, a punchy midrange, and the airy top end just floats on top. This guitar is great for flatpicking, slower or lower-tuned fingerstyle, and percussive guitar styles. Martin makes great guitars in the USA and Mexico now, but back in the day, their Japanese imports were great quality as well.

The DM5 plays, sounds, and looks just as nice as a lot of mid-level instruments that are made nowadays. My Martin/Sigma DM-5 dreadnought acoustic guitar was made in Japan in the early 1970's I believe. It has 20 frets, with access up to the 14th fret. It has a solid spruce top, rosewood back and sides, and a rosewood bridge and fingerboard. There is a very understated binding and rosette, and simple dot inlays on the fingerboard.

The neck is substantial but very manageable with a slight radius, very typical of Martin guitars. It allows chords to be barred at the first fret position with moderate ease. Access to anything beyond the 14th fret is next to impossible due to the lack of a cutaway. Ergonomically, its is a full fize dreadnought guitar which takes getting used to while sitting down due to the thickness, but it is very lightweight due to the thin sides and back and well-designed bracing. It is also what lends itself to the full and robust sound of this guitar. SOUNDS The Sigma series is basically by all birthright a Martin guitar.

It was deisnged by them, and the materials are high quality but manufacturing of them was done overseas in Japan back during a time when most guitars were manufactured in America still. I've played a couple Sigmas in pawn shops that didn't impress me, but this specimen has always given me great sound.

Its the only DM-5 I have ever come across. If you like the Martin dreadnought sound, then you would like this guitar. It has a mellow, sweet sound that projects, with excellent balance between attack and warmth. The thin sides and back allow for maximum body vibration and resonance, especially compared to some new guitars I've played recently that sound dead in comparison to my old DM-5 because the inferior or laminated materials add a lot of weight and resistance to vibration. I play a lot of folk type strumming and fingerpicking, to acoustic rock, to bluesy single-note runs.

The DM-5 stands up well to hard playing with fullness of sound and can be very dynamic in lower volume ranges like in mellow fingerpicking. It is a good all around and versatile acoustic. OVERALL OPINION I've owned this guitar for 3 years, and its been in my family for almost 10 years.

If they have been cared for, then they are more than worth it. The item "(Made by Martin) Sigma DM-5S DM5S Acoustic Guitar (Rare Sunburst) 1970's" is in sale since Monday, November 25, 2019. This item is in the category "Musical Instruments\Guitars & Basses\Acoustic Guitars". The seller is "miklow" and is located in Dundee. This item can be shipped to United Kingdom.