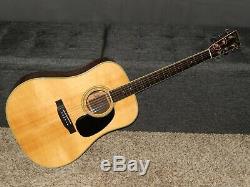 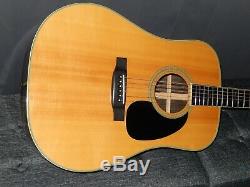 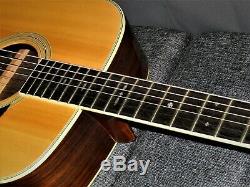 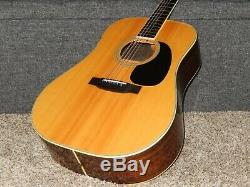 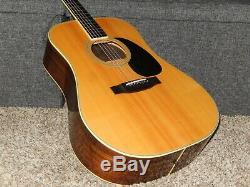 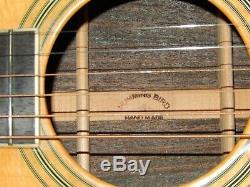 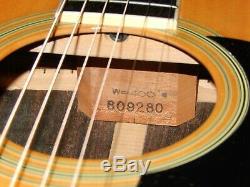 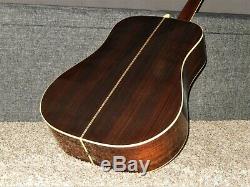 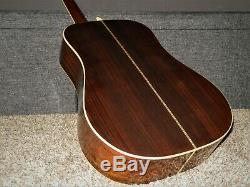 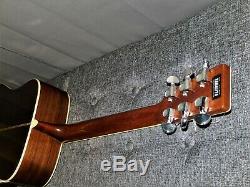 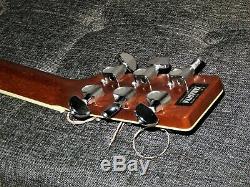 Hummingbird Custom W400 1975 by Tokai. Most acoustic guitar players around the world know that since late 1960s Japanese makers were creating wonderful copies of Martin, Gibson and Guild guitars. Many experienced players know that many of these copies sound better than the originals. This fame especially applies to Sigma guitars made by Martins Japanese partner, Tokai Co. In fact, some of these Sigmas were also made by Yasuma Gakki, Terada Gakki and perhaps other workshops.

Introduction of Cats Eyes series coincided with discontinuation of Hummingbird guitars made by Tokai since early 1970s. Hummingbird Custom were the higher end models within the series and besides different logo no different from Cats Eyes.

Guitar you are looking at was made in 1975. Hummingbird guitars made through 1974 had simpler and less ornamental logo. This guitar being priced 40 000 yen in 1975 was worth 50% of starting yearly salary of Japanese college graduate. It is not that difficult to find out what are the current prices of Japanese made acoustic guitars. Higher grade instruments became more and more expensive, while lower priced ones were made for less and less.

That led to decisively declining exports and meant the end of Golden Era for Japanese guitar makers. Some makers were gone for good, some incorporated into larger entities, while others seriously restructured. Tokai kept making their first generation of Cats Eyes guitar until mid1980s. After over a decade long break, by late 1990s, Tokai re-started making Cats Eyes with lineup of new models, however ending it around mid2000s. The fame of Cats Eyes lives on.

It offers great volume, combined with cool and sparkly tonality, especially suitable for rock, blues and/or other similar styles, not so much for slow lyrical pieces. With its current action plays super easy. Although there is one shallow indentation within the finish on its top, overall condition of this guitar can be described as excellent for its age. The condition of the fingerboard and frets suggests that this guitar hasnt been played a lot. It certainly can be played for many years to come.

Top: Solid Spruce/Martin style X bracing with not scalloped braces /lacquer. Back & Sides: semi-solid Indian Rosewood/urethane. Laminated is quite unfortunate term regarding Japanese made guitars. These plates were made from 2 layers of solid wood glued together with natural resins. They were made so well that they performed as good as solid woods while being far less expensive in guitar production and far more resistant to cracking in regular use.

In recent years many guitar makers around the world adopted a new term "semi-solid" to describe these plates. Neck: Mahogany with 2-way truss rod. The action is set to 2.20 mm under E6 and 1.80 mm under E1, with still extra room on the saddle.

During 1960s and most of 1970s model numbers of Japanese guitars were strictly interconnected with their prices in Japanese yen. In late 1970s and during following decades model numbers were no longer strictly associated with their prices. Many Japanese guitar makers introduced model names instead of model numbers. Others were still using model numbers with addition of letter abbreviations or other symbols. The best and only logical approach while evaluating real value (real grade) of vintage Japanese guitar is to compare its price in Japanese yen with SYSJCG during the year guitar was made. Any guitar priced 100 000 in 1970 (labelled usually as No10) would be priced 200 000 yen in 1975 (relabeled to No20 or 2000), 300 000 yen in 1977 (labelled as No3, No30 or 3000). Starting in 1977 Masaru Kohno introduced his new models No40 priced 400 000 yen and No50 priced 500 000 yen. By 1984 Kohno started using model names instead numbers and was raising their prices as he was pleased.

Notify me within 48 hours after receiving the guitar. Pack guitar the same way I do it, using the same box and materials and s. Hip it back to me within 24 hours after "return notification". The item "MADE BY TOKAI HUMMINGBIRD CUSTOM W400 1975 GREAT D42 STYLE ACOUSTIC GUITAR" is in sale since Monday, May 4, 2020.

This item is in the category "Musical Instruments & Gear\Guitars & Basses\Acoustic Guitars". The seller is "victork1962" and is located in Alpharetta, Georgia. This item can be shipped to United States, Canada.