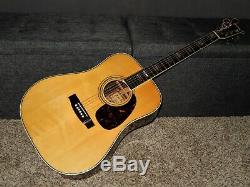 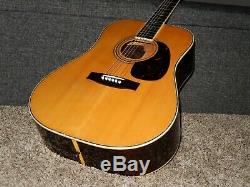 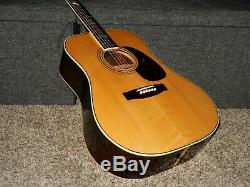 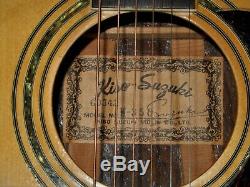 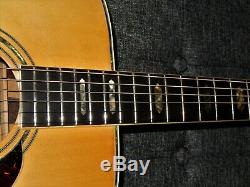 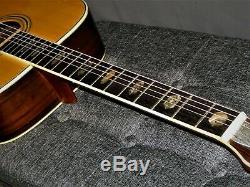 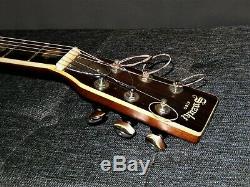 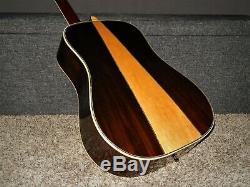 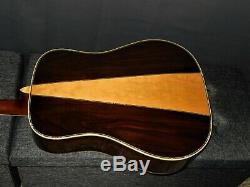 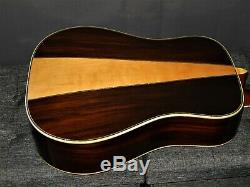 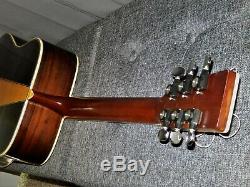 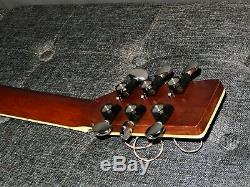 Kiso Suzuki Violin W350 1972. Most acoustic guitar players around the world know that since late 1960s Japanese makers were creating wonderful copies of Martin, Gibson and Guild guitars. Many experienced players know that many of these copies sound better than the originals. This terrific guitar was made in early 1970s by Kiso Suzuki Violin Co. One of the oldest and highest reputable Japanese musical instrument makers. Its construction is based on Martin blueprints. Its sound makes it tough competitor against many highly priced modern era Martin guitars.

Being priced 35000 yen in 1972 it was worth 60% of Starting Yearly Salary of Japanese College Graduate. Similar specifications guitars currently made in Japan are priced minimum 250 000yen, but those with baked tops mimicking the sound of vintage ones, are priced minimum 3500 000yen.

Some highly ornamented model are priced above 500 000 yen level. It offers super volume, combined with rich and sparkly tonality, yet with some warmth to it, all magnified by very impressive sustain. These traits make it very versatile instruments that can be used for all kind of styles.

With its current action plays super easy. Even though its body bears are few minor scratches and abrasions (most of them located on the top), its bindings are not snow white and perhaps one can find few other minor imperfections, overall condition can be described as at least very good for its age.

Guitar doesnt have any structural defects, is fully functional and plays very easy. The condition of the fingerboard and frets suggests that this guitar hasnt been played a lot. It certainly can be played for many years to come. Top: Solid Spruce/Martin style X bracing with not scalloped braces /lacquer.

Back & Sides: semi-solid Brazilian Rosewood/ Chestnut/ Brazilian Rosewood/urethane. Laminated is quite unfortunate term regarding Japanese made guitars. These plates were made from 2 layers of solid wood glued together with natural resins. They were made so well that they performed as good as solid woods while being far less expensive in guitar production and far more resistant to cracking in regular use.

In late 1970s and during following decades model numbers were no longer strictly associated with their prices. Many Japanese guitar makers introduced model names instead of model numbers. Others were still using model numbers with addition of letter abbreviations or other symbols. The best and only logical approach while evaluating real value (real grade) of vintage Japanese guitar is to compare its price in Japanese yen with SYSJCG during the year guitar was made.

Notify me within 48 hours after receiving the guitar. Pack guitar the same way I do it, using the same box and materials and s. Hip it back to me within 24 hours after "return notification". The item "MADE IN 1972 KISO SUZUKI W350 ABSOLUTELY SUPERB D45 STYLE ACOUSTIC GUITAR" is in sale since Monday, May 4, 2020. This item is in the category "Musical Instruments & Gear\Guitars & Basses\Acoustic Guitars".