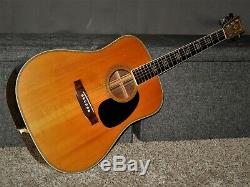 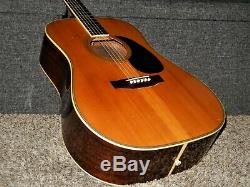 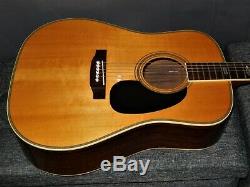 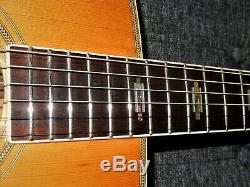 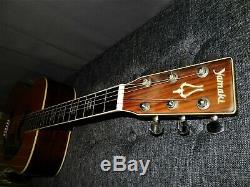 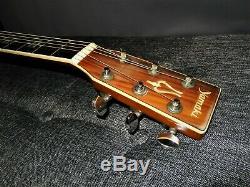 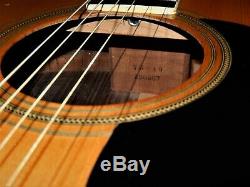 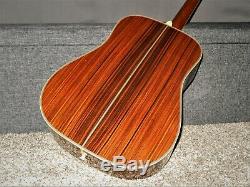 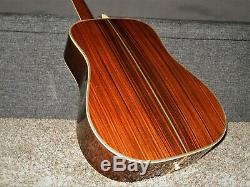 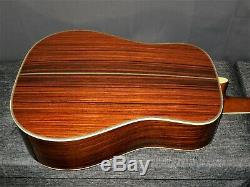 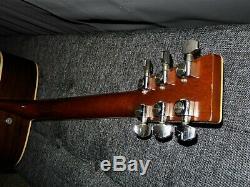 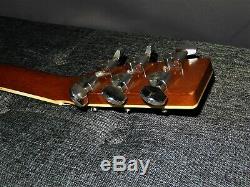 Yamaki YW40 Acoustic Steel String Guitar. Most acoustic guitar players around the world know that since late 1960s Japanese makers were creating wonderful copies of Martin, Gibson and Guild guitars. Many experienced players know that many of these copies sound better than the originals. During 1970s Yamaki was of one of leading Japanese Gakkis, making high grade classical and based on Martin blueprints terrific steel string acoustic guitars. Greatness of Yamaki acoustics has been recognized all around the world and their value remains unquestioned.

Many experienced players know that they sound no different from made in USA originals. Some say, that they sound better. This very fine guitar was made in 1975 being the 3.

From the top model in Yamakis YW series, bettered by YW50 and YW60. If you are familiar with far more expensive Martin guitars, there is a great chance, that youll be very happy with this amazing Yamaki instrument. You may actually be come obsessed with its gorgeous tonality.

This guitar sounds simply fantastic. It offers very impressive volume, super response and very rich, sparkly, yet sweet and lyrical tonality, with great deal of overtones and harmonics. It certainly deserves a title of Concert instrument. With its current action and extra light strings, it plays easy.

This guitar was priced 40 000 yen in 1975, when starting yearly salary of Japanese College Graduate was around 80 000 yen. It is not that difficult to find out what are the current prices of Japanese made acoustic guitars. Besides several small dents on its top, and just few tiny dents on its back, and perhaps few other minute marks on other areas, overall condition of this guitar can be described as at least very good for its age.

Practically all Yamaki guitars from 1970s have developed serious cloudiness within finishes, especially on their headstocks. On this guitar this cloudiness is relatively mild and greatly exaggerated on the pictures.

Neck: Mahogany with 2-way truss rod. The action is set to 2.80 mm under E6 and 2.3 mm under E1, with practically no extra room on the saddle. The story of Daion and Yamaki guitars is entwined with the histories of a number of other Japanese companies. In the late 1940s, brothers Yasuyuki and Kazuyuki Teradaira started working for Tatsuno Mokko, an instrument-building firm that later split into two different companies, one of which was called Hayashi Gakki. Hayashi Gakki was bought out by Zenon, a large music distributor.

S designs and were distributed exclusively through Daion. Hirotsugu Teradaira joined the organization, Yamaki was the guitar brand and Daion is only the wholesaling companys name, and it was not the name of the guitar brand.

Yamaki factory produced the acoustic guitars and Daion distributed Yamaki guitars exclusively in Japan. But Teradaira Brothers market was only restricted to Japan when they started.

Sometime in the late 1960s, Daion began exporting Yamaki guitars to America and Canada, where they were well received. Yamakis production capacity was around 1000 instruments pr month or around 33000 in total. Production capacity per month some were under Yamaki name and also Washburn USA brand and finally the Daion name. These were roughly split into Daion 70%, Yamaki 20%, Washburn 10% (Wings, Stage, and acoustics).

Hirotsugu Teradaira graduated from the University in 1974, he joined his fathers distribution company. Overall there were a total of 30 people working there. The Yamaki factory was located in Suwa and there were overall only about 50 people at the factory. Their name is Great West Imports Ltd. And their head office is located in Vancouver. As a part of that deal, The Great West Import company hired Mr. Hirotsugu Teradaira as a warehouse worker doing the daytim and he studied English at the Community Collage after hours. This lasted for good 2 year until 1977. After those 2 years Mr.

Hirotsugu Teradaira came back to Japan and he started to designing acoustic guitars under the series name of The Year Series. This was in from 1978. After he had introduced The 78 Acoustic guitar he also started to add significant difference on each Year series and each electric guitars. Later he also designed several other Daion instruments including the Daion Headhunter as well as Yamaki and Washburn instruments.

There are 3 dates on the different Yamaki/Daion instruments. 1962 dates to when Yamaki was founded. 1967 was when Daion was founded. This date is very interesting because there is a lot of history there.

Sweden, Denmark, Finland, Italy, Switzerland, Greece, Australia, Singapore. By the early 1980s, however, Daion felt that the Yamaki Martin-style guitars were getting lost among similar instruments from other Japanese builders like Takamine, Yasuma, and C. Mountain, so they redesigned the entire acoustic line and started building acoustic-electrics and solid-body electrics as well as oddities like double-neck acoustics. They dropped the Yamaki name and rebranded their instruments as Daion guitars.

Daion began an extensive advertising campaign to introduce the new line around 1982, but this was a time when musicians were more interested in the new MIDI-equipped synthesizers than in guitars. In 1983 Yamaki moved from Suwa to Shiga, but both place are in Nagano Pref. And in fact, those 2 places are not too far away apart.

Yamaki/Daion stopped exporting guitars to America and went out of business. At the time of bankruptcy, it was nothing but chaos. After the bankruptcy of Yamaki/Daion, Teradaira brothers split and their correspondences came down to almost zero. Kazuyuki Teradaira moved and start producing Persimmon Wooden golf club heads. He was quite successful making those.

Any Daion instruments you see after mid 1984 were made by unknown luthiers. No Yamaki people produced any instruments around mid-80s. Real Value of Japanese Vintage Guitars. The key to understand value of vintage Japanese guitars is to acknowledge galloping devaluation of Japanese yen in 1960s & 1970s. This devaluation was somewhat slower in 1980s.

Model 50 became model Maestro, model 40 became model Special, model 30 became model Professional-J. Naturally other Master luthiers were doing the same name/price changes. Knowing all of that, you can bet on that Masaru Kohno No50 made in 1982 is practically the same grade instrument as Kohno No20 made in 1972, or Kohno no 30 made in 1976. Kohno No40 made in 1982 is exactly the same grade instruments as Kohno No15 made in 1972 or Kohno No20 made in 1975. All you need to do is. Notify me within 48 hours after receiving the guitar. Pack guitar the same way I do it, using the same box and materials and s. Hip it back to me within 24 hours after "return notification". The item "MADE IN 1975 YAMAKI YW40 ABSOLUTELY MAGNIFICENT D45 STYLE ACOUSTIC GUITAR" is in sale since Sunday, May 24, 2020. This item is in the category "Musical Instruments & Gear\Guitars & Basses\Acoustic Guitars". The seller is "victork1962" and is located in Alpharetta, Georgia. This item can be shipped to United States, Canada.