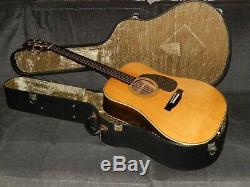 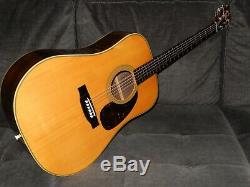 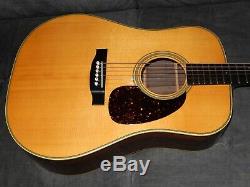 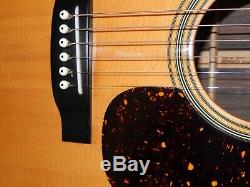 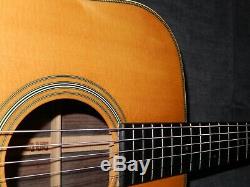 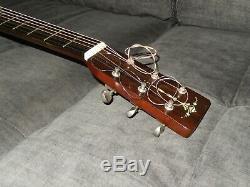 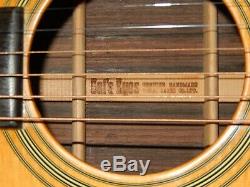 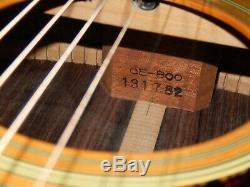 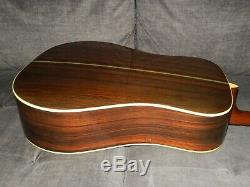 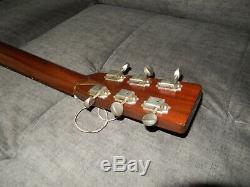 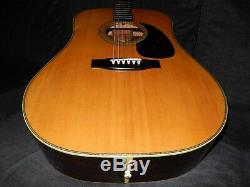 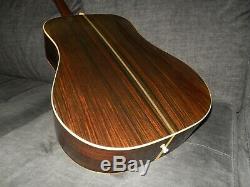 In 1975 Tokai launched their own line of acoustic guitars branding them as Cats Eyes and advertising them as made in partnership with Martin. Made basing on Martins blueprints and enhanced by Japanese ingenuity and highest level of craftsmanship, these guitars quickly became very popular and recognized by majority of international players as Martins made in Japan. Higher grade instruments became more and more expensive, while lower priced ones were made for less and less. That led to decisively declining exports and meant the end of Golden Era for Japanese guitar makers.

Some makers were gone for good, some incorporated into larger entities, while others seriously restructured. The fame of Cats Eyes lives on.

Guitar you are looking at was made in 1982 and it was priced 80 000 yen while Starting Yearly Salary of Japanese College Graduate was equal to around 105 000 yen. Although it doesnt have many ornamental extras and it doesnt look brand new anymore, it is a truly gorgeous instrument. Its very impressive volume is combined with rich sparkly tonality, with plenty of overtones, yet with exceptional level of note clarity and separation. The most striking feature is its very extended sustain. It is a pure joy to listen.

With its current action it is also a joy to play. Its tuners have lost a lot of their original luster and its finishes became somewhat cloudy. Its body bears few cosmetic imperfections, out of which most noticeable is the scratch located near the edge of the lower left bout of its back.

This scratch has been sealed with superglue and re-polished. Another noticeable imperfection is located on front plate in the area between the bridge, sound hole and top of pickguard (on picture 4 youll see a very mild darker line right above string E1). Although to some watchers it may look like a crack in the finish, I believe it is a light scratch made by needle-like object. It doesnt really seem to penetrate the finish all the way through.

The wood underneath remains firm and untouched. Despite all these imperfections, it can be a perfect companion to an experienced (perhaps non-perfect anymore) player. Top: Solid Spruce with reinforcing ring of wood glued underneath the sound-hole /Martin style X bracing with not scalloped braces /lacquer.

Sides: Indian Rosewood laminates /urethane. Neck: Mahogany with 2-way truss rod. The action is set to 2.50 mm under E6 and 2.0 mm under E1, with still extra room on the saddle. All you need to do is. Notify me within 48 hours after receiving the guitar. Pack guitar the same way I do it, using the same box and materials and s. Hip it back to me within 24 hours after "return notification". The item "MADE IN 1982 CAT'S EYES CE800 SIMPLY GREAT MARTIN D28 STYLE ACOUSTIC GUITAR" is in sale since Monday, May 20, 2019.