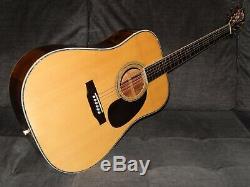 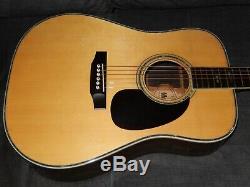 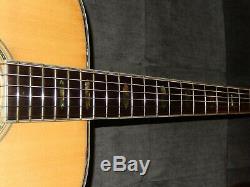 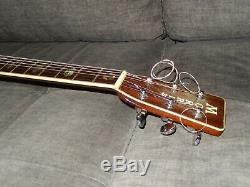 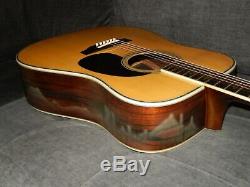 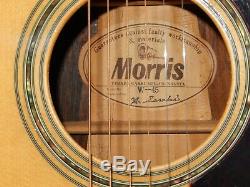 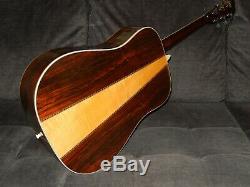 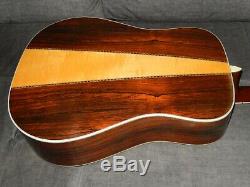 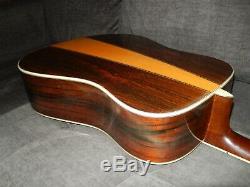 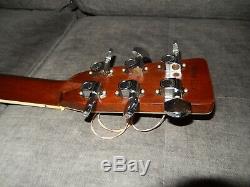 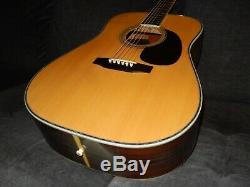 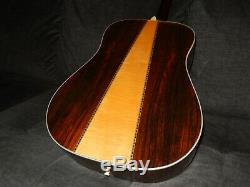 Most acoustic guitar players around the world know that since late 1960s Japanese makers were creating wonderful copies of Martin, Gibson and Guild guitars. Many experienced players know that many of these copies sound better than the originals. This guitar was handmade in 1975 for Morris Co.

By Terada Gakki, one of the best Japanese team of guitar makers of that era. Although Morris had its own workshop in Matsumoto, many of their acoustic guitar were made by Terada. Their highest models were made by Sadao Yairi. Construction of all these guitars is nothing but replica of Martin blueprints.

Until 1974 Morris dreadnought acoustic guitars had horizontal logo on their headstocks. In 1975 Morris introduced new vertical logo and in 1976 letters TF were added on both sides of the logo. This was the beginning of Morris TF series although model names were still Wxx. Since 1981 all dreadnought models were labelled as TFxxx. In 1976 Morris top model was W100 (followed by W80, W60 and W50). Midrange W45 was still very high-grade instrument (followed by W40, W35, W30, W25, W20, W18 and W15). It wasnt cheap at all. This guitar was priced 45 000 yen in 1975, when starting yearly salary of Japanese College Graduate was 67 200 yen. The construction and looks of this wonderful guitar are based on Martin D45 blueprint, but with 3pieces back.

I wont however call it a copy of Martin D45. The word copy suggests a product of somewhat lower quality than the original, while this guitar can easily beat many brand-new Martin guitars. It offers impressive volume and superb response. Basses are deep but very clean. Trebles are metallic but very sweet at the same time.

All notes have their unique colors, all are super clear and super well separated. When chords/arpeggios are played guitar releases a bounty of overtones and harmonies. With its current action it plays ultra-easy.

Despite its age overall condition of this guitar can be described as excellent. Its body bears only few tiny dents. The most visible cosmetic flaw is the cloudiness of its finishes, especially pronounced on one side.

This naturally doesnt affect the sound of the guitar. It certainly makes this guitar unique (and perhaps hard to steal). Top: Thin plate of very tight grain Solid Spruce with reinforcing ring of wood glued underneath the sound-hole /Martin style X bracing with not scalloped braces / light coat of lacquer. Back: Brazilian Rosewood/Chestnut/Brazilian Rosewood laminates /light coat of lacquer.

Anderson, Lotus (some) and Sakai. The Morris Guitars company has been building quality handcrafted instruments in Nagano, Japan for a long time. Toshio Moridaira, the founder, was the first distributor in Japan to carry both Fender and Gibson lines.

In 1964, due to his working relationship with Gibson, Mr. Moridaira was able to visit the Gibson factory in Kalamazoo, Michigan. An employee at Gibson nicknamed him Mori at that time. In 1967, he founded the Morris Guitars company.

He named it Morris, taken from the nickname given to him a while back. Morris produced copies of dreadnought and small jumbo models based on Martin and Gibson designs. Since then, Morris Guitars have enjoyed an outstanding reputation in Japan and other countries for making high quality guitars. In 1974, Morris introduced their guitars at the NAMM show. In 1978, Morris introduced the Tornado line, thin body acoustic-electric guitars inspired by the Ovation design. Up until the early 80s, the U. Market saw a variety of guitars that Morris imported from Japan. In 2001, after a lengthy absence, Morris Guitars re-entered the U. They participate in the annual Winter NAMM Show in Anaheim, CA.

All you need to do is. Notify me within 48 hours after receiving the guitar. Pack guitar the same way I do it, using the same box and materials and s. Hip it back to me within 24 hours after "return notification". The item "MADE IN JAPAN 1975 MORRIS W45 ABSOLUTELY WONDERFUL D45 STYLE ACOUSTIC GUITAR" is in sale since Tuesday, April 23, 2019. This item is in the category "Musical Instruments & Gear\Guitars & Basses\Acoustic Guitars".