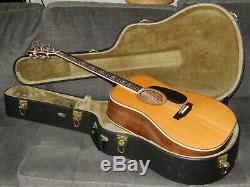 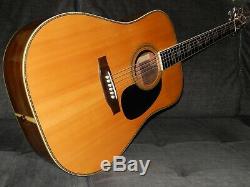 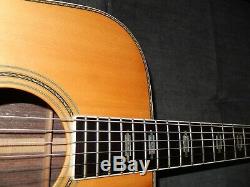 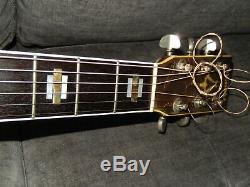 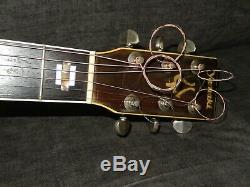 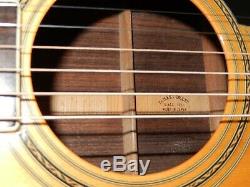 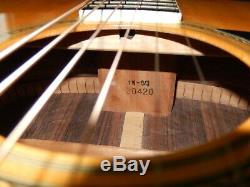 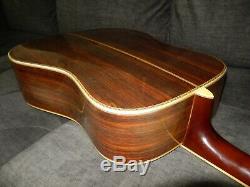 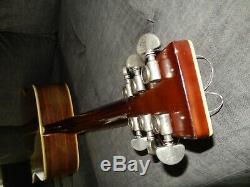 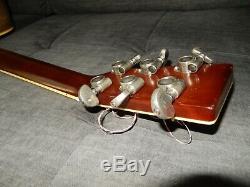 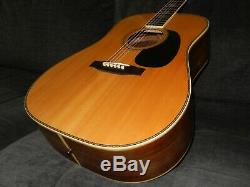 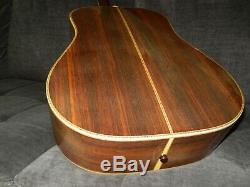 Yamaki YW60 Acoustic Steel String Guitar. Most acoustic guitar players around the world know that since late 1960s Japanese makers were creating wonderful copies of Martin, Gibson and Guild guitars. Many experienced players know that many of these copies sound better than the originals. During 1970s Yamaki was of one of leading Japanese Gakkis, making high grade classical and based on Martin blueprints terrific steel string acoustic guitars.

Greatness of Yamaki acoustics has been recognized all around the world and their value remains unquestioned. Many experienced players know that they sound no different from made in USA originals. Some say, that they sound better. This very fine guitar was made around 1975 being the top model in Yamakis YW series. Yamaki catalog from 1976 shows YW60 as top model, while in 1978 catalog 1978 YW60 is the second model from the top, bettered only by model YW80.

Because the guitar you are looking at, is all solid woods construction, I believe it was made prior to 1976. If you are familiar with far more expensive Martin guitars, there is a great chance, that youll be very happy with this amazing Yamaki instrument. This guitar sounds simply fantastic. It offers very impressive volume, super response and very rich, sparkly, yet sweet and lyrical tonality, with plenty of overtones and harmonics. It certainly deserves a title of Grand Orchestra instrument. With its current action and very high sensitivity to the touch, playing it is simply effortless. This guitar was priced 60 000 yen in 1975, when starting yearly salary of Japanese College Graduate was around 80 000 yen.

Besides few small dents on its top, and perhaps few other minute marks, overall condition of this guitar can be described as excellent for its age. Practically all Yamaki guitars from 1970s have developed serious cloudiness within finishes, especially on their headstocks. On this guitar this cloudiness is relatively mild and greatly exaggerated on the pictures. Top: Solid Spruce with reinforcing ring of wood glued underneath the sound-hole /Martin style X bracing with not scalloped braces /lacquer.

Back & Sides: Solid Rosewood/lacquer. Neck: Mahogany with 2-way truss rod. The action is set to 2.50 mm under E6 and 2.0 mm under E1, with still extra room on the saddle.

Yamaki Story by Michael John Simmons (from acoustic-guitar-forum). The complex story of Yamaki guitars is entwined with the histories of a number of other Japanese companies. In the late 1940s, brothers Yasuyuki and Kazuyuki Teradaira started working for Tatsuno Mokko, an instrument-building firm that later split into two different companies, one of which was called Hayashi Gakki.

In 1954 Hayashi Gakki was bought out by Zenon, a large music distributor. In 1962 Yasuyuki left Zenon to start an instrument distributor he called Daion, which means big sound in Japanese. In 1967 Kazuyuki left Zenon to produce classical guitars under the name Yamaki, an auspicious Japanese word meaning happy trees on the mountain. By the early 1970s, Kazuyuki expanded the Yamaki line to include a large number of steel-string guitars, many of which were based on C. S designs and were distributed exclusively through Daion.

Sometime in the late 1960s, Daion began exporting Yamaki guitars to America, where they were well received. By the early 1980s, however, Daion felt that the Yamaki Martin-style guitars were getting lost among similar instruments from other Japanese builders like Takamine, Yasuma, and C.

In 1984 Daion stopped importing guitars to America and soon went out of business. Yamaki, on the other hand, survived the downturn of the 1980s and now makes parts for other Japanese guitar companies. Real Value of Japanese Vintage Guitars. The key to understand value of vintage Japanese guitars is to acknowledge galloping devaluation of Japanese yen in 1960s & 1970s. This devaluation was somewhat slower in 1980s. The best measure of this devaluation is Starting Yearly Salary of Japanese College Graduate (SYSJCG). SYSJCG in 1965 was 19 600 yen, in 1969 34 600 yen, in 1970 39 200 yen, in 1972 62 300 yen, in 1975 79 200 yen, in 1977 86 200 and in 1980 - 100 000 yen. During 1960s and most of 1970s model numbers of Japanese guitars were strictly interconnected with their prices in Japanese yen. In late 1970s and during following decades model numbers were no longer strictly associated with their prices. Many Japanese guitar makers introduced model names instead of model numbers. Others were still using model numbers with addition of letter abbreviations or other symbols. The best and only logical approach while evaluating real value (real grade) of vintage Japanese guitar is to compare its price in Japanese yen with SYSJCG during the year guitar was made. Any guitar priced 100 000 in 1970 (labelled usually as No10) would be priced 200 000 yen in 1975 (relabeled to No20 or 2000), 300 000 yen in 1977 (labelled as No3, No30 or 3000). Starting in 1977 Masaru Kohno introduced his new models No40 priced 400 000 yen and No50 priced 500 000 yen. By 1984 Kohno started using model names instead numbers and was raising their prices as he was pleased. Model 50 became model Maestro, model 40 became model Special, model 30 became model Professional-J.

All you need to do is. Notify me within 48 hours after receiving the guitar. Pack guitar the same way I do it, using the same box and materials and s. Hip it back to me within 24 hours after "return notification". The item "MADE IN JAPAN 1975 YAMAKI YW60 SIMPLY TERRIFIC D45 STYLE ACOUSTIC GUITAR" is in sale since Wednesday, August 28, 2019.