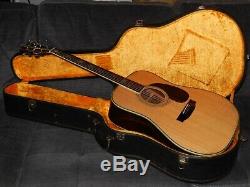 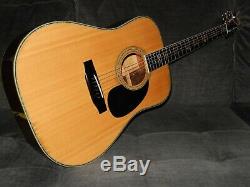 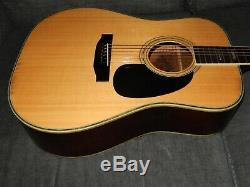 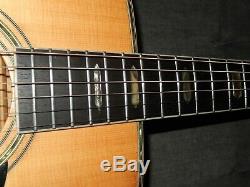 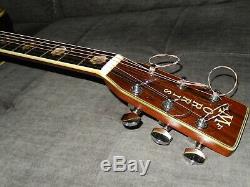 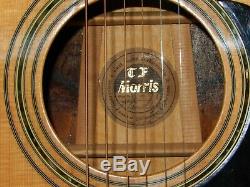 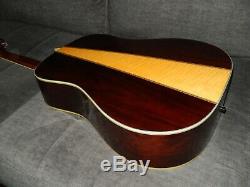 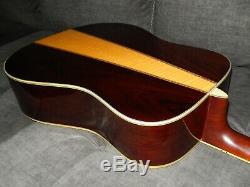 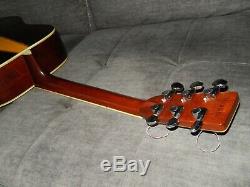 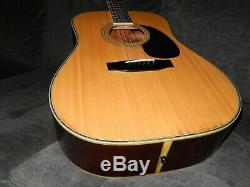 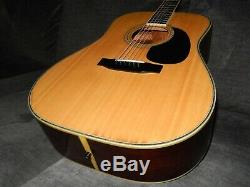 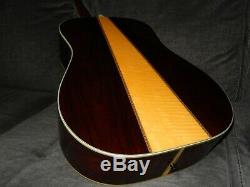 Many experienced players know that many of these copies sound better than the originals. This guitar was handmade late1970s by best Morris luthiers at their Matsumoto workshop. It was a mid range model within Morris's lineup of that era. Back then in 1979 it was quite expensive instrument.

Being priced 70 000yen it was worth 70% of starting yearly salary of Japanese college graduate (=100 000yen at that time). The construction and looks of this wonderful guitar are based on Martin D45 blueprint. I wont however call it a copy of Martin D45. The word copy suggests a product of somewhat lower quality than the original, while this guitar can easily beat many brand-new Martin guitars. It offers impressive volume and superb response.

Basses are deep but very clean. Trebles are metallic but very sweet at the same time. All notes have their unique colors, all are super clear and super well separated.

When chords/arpeggios are played guitar releases a bounty of overtones and harmonies. With its current action it plays ultra-easy. Even though original tuning keys have lost a bit of their original luster and one can find few very small marks on its body. Verall condition of this guitar can be described as "at least excellent for its age".

The only "serious" cosmetic imperfections are. Tiny dent on the bridge behind pins E6&E5 and 1/2 inch long linear mark located between the bridge and pickguard.

This is either scratch/dent or dent/crack in the finish caused by the pick. Guitar doesnt have any structural problems. Its neck is straight and frets are leveled. Top: Thin plate of very tight grain Solid Spruce with reinforcing ring of wood glued underneath the sound-hole /Martin style X bracing with scalloped braces /ultra-light gloss finish. Back: Brazilian Rosewood/Chestnut/Brazilian Rosewood laminates /lacquer.

Sides: Brazilian Rosewood laminates /lacquer. Laminated is quite unfortunate term regarding Japanese made guitars. These plates were made from 2 layers of solid wood glued together with natural resins. They were made so well that they performed as good as solid woods while being far less expensive in guitar production and far more resistant to cracking in regular use. In recent years many guitar makers around the world adopted a new term "semi-solid" to describe these plates.

Neck: Mahogany with 2-way truss rod. The action is set to 2.50 mm under E6 and 2.00 mm under E1, with still extra room on the saddle. Some info related to this guitar. Founded in 1967 by Toshio "Mori" Moridaira, the Moridaira factory produced high-quality guitars, including the infamous Morris badged guitar.

Moridaira also produced badged guitars for Hohner including Coronado, Futurama, H. Anderson, Lotus (some) and Sakai. The Morris Guitars company has been building quality handcrafted instruments in Nagano, Japan for a long time. Toshio Moridaira, the founder, was the first distributor in Japan to carry both Fender and Gibson lines. In 1964, due to his working relationship with Gibson, Mr.

Moridaira was able to visit the Gibson factory in Kalamazoo, Michigan. An employee at Gibson nicknamed him Mori at that time. In 1967, he founded the Morris Guitars company. He named it Morris, taken from the nickname given to him a while back. Morris produced copies of dreadnought and small jumbo models based on Martin and Gibson designs. Since then, Morris Guitars have enjoyed an outstanding reputation in Japan and other countries for making high quality guitars. In 1974, Morris introduced their guitars at the NAMM show. In 1978, Morris introduced the Tornado line, thin body acoustic-electric guitars inspired by the Ovation design.

Up until the early 80s, the U. Market saw a variety of guitars that Morris imported from Japan. In 2001, after a lengthy absence, Morris Guitars re-entered the U. They participate in the annual Winter NAMM Show in Anaheim, CA.

Today, Morris Guitars are played by some of the worlds finest fingerstyle guitarists. Our products are available through a small number of dealers here in the U. All you need to do is. Notify me within 48 hours after receiving the guitar. Pack guitar the same way I do it, using the same box and materials and s. Hip it back to me within 24 hours after "return notification". The item "MADE IN JAPAN 1979 MORRIS W70 ABSOLUTELY TERRIFIC D45 STYLE ACOUSTIC GUITAR" is in sale since Saturday, November 23, 2019. This item is in the category "Musical Instruments & Gear\Guitars & Basses\Acoustic Guitars". The seller is "victork1962" and is located in Alpharetta, Georgia. This item can be shipped to United States, Canada.