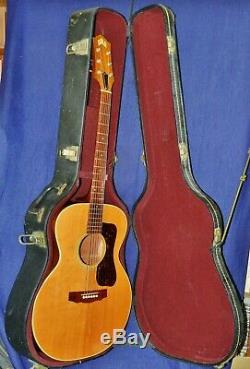 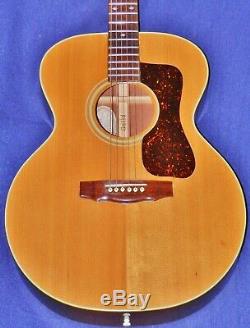 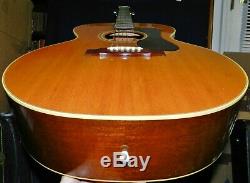 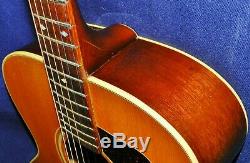 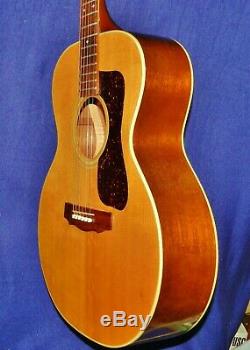 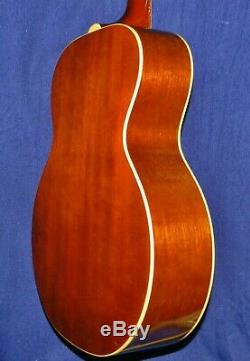 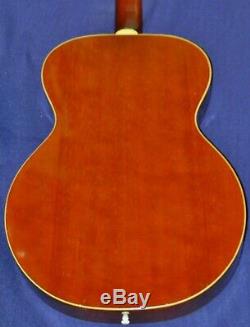 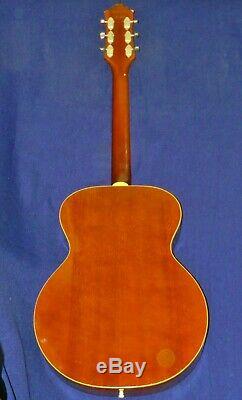 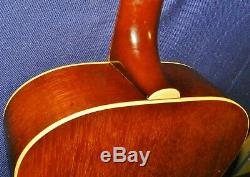 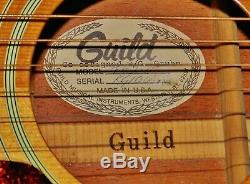 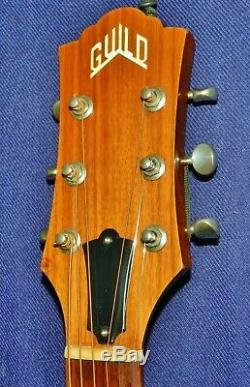 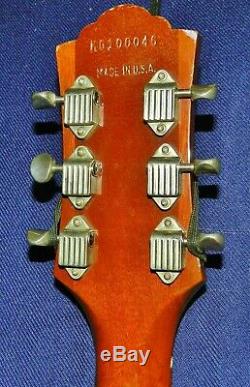 PLEASE READ : As you can see by googling my on-line store ALUMPSTERS GUITARS, I generally sell only Martin, Gibson, Guild, Taylor, Larrivee, and Alvarez-Yairi guitars. Most of these models are made so well that they tend to increase in value and improve in the complexity and resonance of their sound as they age, regardless of their appearance.

I will also consider reasonable offers in my store, including installment payments and trade-ins. If you have a question about this guitar, please Google alumpsters guitars to ask on-line and I will be happy to respond immediately. This rare Guild F-42NT guitar was made in Guilds Westerly, Rhode Island, plant in 1984; its unusual serial number (KG100046) and the Guild website indicate that it is number 46 of a total run of only 65 guitars. The F-42NT was one of six Guild guitars designed by George Gruhn (of Gruhn Guitars in Nashville), and was introduced as a version of the original F orchestra style guitars, discontinued in the late 1980s to re-appear as the GF series. This guitar has a Sitka spruce top with light scalloped bracing and mahogany back, sides, and neck.

It is thinner than the standard Jumbo guitars, and has a very fast thin, round neckbut with a nut width of 1 11/16. This particular guitar has been dominating lesser and larger instruments for 35 years, and the resonance of its aged woods will continue to improve with its new generation of players. Its classic design and well-aged looks make it stand out in a crowd, but its the wonderfully full sound that will make other musicians turn around to check it out. The Guild F-42NT has a "folk" or mini-jumbo body style, with a full rounded 16 lower bout but a rather narrow 9 ½ waist compared to a dreadnought, making it easier to handle for many players without sacrificing its powerful bass. The body has multi-ply binding, top and back, and it has a large tortoiseshell pick guard, a rosewood bridge with white black-dot pins, and a multi-stripe inlaid rosette.

The 14/20-fret rosewood fingerboard with unusual pearl inlay position markers ends in a mahogany headstock with unusual three-per-side enclosed tuners and the Guild logo decal. This is a really interesting-looking guitar.

Considering its 35 years of seasoning and enthusiastic play, its not surprising that there are a few cosmetic and structural items to report: there is of course some slight finish crazing, especially on the top of the lower bout (to let the sound out, as my luthier says), as well as a few dings barely visible in the pictures. However, there are no cracks, and nothing that requires any repair work, since a neck reset was done in spring of 2016, and the bridge was replaced in the spring of 2017.

The action is very low and comfortable with string heights at 6/64ths on the bass side and 4/64ths on the treble side, at the 12th fret, and there is plenty of saddle left for future adjustments. Although it is quite rare, this guitar is not a museum piece. It is a totally cool instrument, and it is a real Guild, Made to be Played, and it has been making music and turning heads for a generation. It has now been thoroughly checked out and set up, and its ready to beat up on some banjo and fiddle players. Any hesitation you might feel about it due to its unusual model should be more than overcome when you hear the remarkable sound and resonance released from its solid woods by the unique design.

Lord willing and the creek dont rise, it will pass into the hands of a player able to make music and turn heads for a generation or two to come. The included original hard shell case is in very good condition, and obviously fits the guitar perfectly.

The burgundy plush lining is soft and relatively odor-free, and structurally it is solid as a rock. It is the ideal vintage complement for this rare vintage guitarand of course it offers outstanding protection.

I have made every effort to describe and illustrate this guitar and case with scrupulous accuracy. Be accepted unless it can be shown that it was egregiously misrepresented in this listing. Thank you for your interest in this rare Guild guitar.