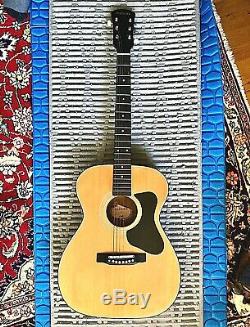 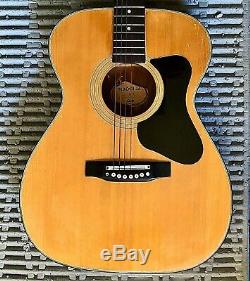 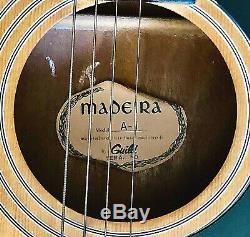 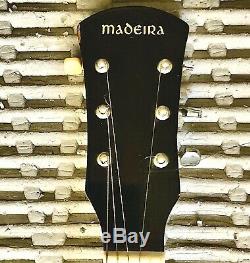 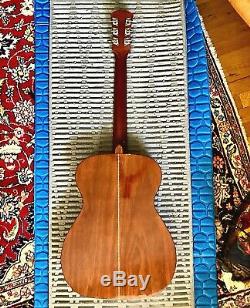 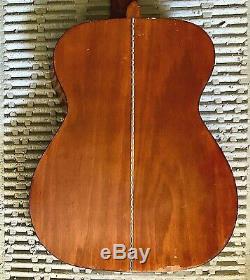 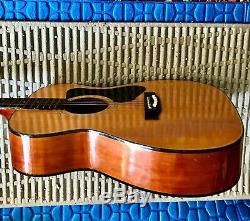 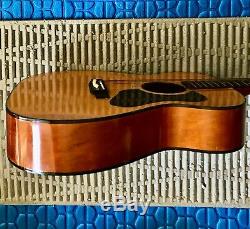 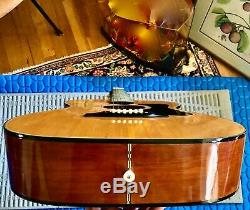 Made in Japan circa 1970's. Spruce top mahogany sides and back laminates? Good looking player with flat/straight neck that provides good action. Has an adjustable truss rod if needed. Good overall condition with a couple minor issues - tuners are a mixed set and some are missing buttons, has a ding on the bottom of the rear board, some wear on the fretboard (but fret wires look good), missing one of the fret marker inlays. Not enough to even call it an e-z project - just put on a new set of tuners and a set of strings and you're ready to go! Here's some info on Madeiras I dug up. Japanese makers of Madeira guitars were strictly held to the same standards and supplied with the exact same materials and gear as the USA Guild. The original Madeira guitars were the same as the Guild only built in Japan instead of New Jersey, and with a different name on the headstock. The book "Guitar Stories: The Histories of Cool Guitars" by Michael Wright says that Guild introduced its Japanese-made Madeira guitars in 1973. However, he also states that, its not known how long the Madeira acoustics lasted, but quite possibly through the 70s. This latter concession by Michael Wright alludes to the limited nature of definitive information on Madeira. At least one online source references a price sheet (2182-D) with a date of March 1, 1982. Furthermore, the Faas Corporation supposedly discontinued the Madeira line shortly after purchasing Guild in 1988. The guitars were first made in Japan based on existing Guild designs.

Kasuga probably build the Japanese versions. Kasuga was one of the oldest stringed instrument manufactures in Japan open approx. The quality of guitars built by Kasuga was very good.

Production later moved to Korea. Legend has it that the Japanese workshop used pre-machined materials that were made in the USA by Guild. There doesnt seem to be a consensus regarding those assembled in Koreamaybe some used materials from the US, maybe not. Needless to say, the Japanese versions are preferred.

The label inside the sound hole is commonly used to determine whether a Madeira was assembled in Japan or Korea. Japanese imports generally had an oval label that reads, Adjusted and Distributed Exclusively by Guild.

Square labels that state, Designed, Warranteed and Distributed Exclusively by Guild generally reference a Korean import. Madeira by Guilds model designation uses a two (sometimes three) part alphanumeric system that includes a prefix, a series number and sometimes a suffix. The prefix indicates the type of acoustical guitar. Generally, the series number that follows the prefix increased with the quality and price.

The suffix, when present, indicates the type of wood or finish. B = All Black, Mahogany. M = Maple or Mahogany (let the color of the wood be your guide).

S = Solid Spruce Top (usually paired with M or R and placed last). All first generation Japanese guitars have the flat-topped headstock. A catalog, reportedly from 1975, shows that all steel string acoustics featured the curved top. A curved top (with an oval label) is likely from 1975 to 1979.

The inner ply of Madeira laminates could be solid poplar, soft maple, larch, or alder. The woods Guild used for lamination back in the day certainly were not low quality composites. These charges are the buyers responsibility.